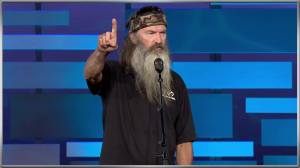 Phil Robertson, from the Duck Dynasty TV show, has a wonderful ability to convey to the masses (via his appearance and antics) that the life of any Christian can be fun, edgy, and meaningful. In other words, all Christians don’t have to aspire to look and act like Billy Graham or Francis Chan (don’t get me wrong, I think Billy and Francis are dashing fellows, even though I’ve never seen them in camo and full beards). But it is encouraging that the Robertson family and Duck Dynasty are extremely popular with such a wide range of people right now. Even so, we ought to remember that America has become a fickle nation of fadaholics. The Roberson’s personify the meme. But how long will it last? I hope it lasts a long time and in a good way. Perhaps there is a third generation of Robertson’s waiting in the wings to take the reins.

Here’s the part that blows my mind: God may be directly using the Robertson’s to inspire millions of Americans (who might otherwise never give God or Christianity a second thought) to ponder the meaning of commitment to family, redemption, transformation, and choosing to live a life that follows Christ while at the same time enjoying life and being industrious. I find it exhilarating and ironic that God has used the Robertson’s to spread the message of God on such a large scale. American church leaders and congregations may have been waiting for a skilled and charismatic speaker, author, mega-church pastor or evangelist to reintroduce God to the people, but God may have other plans. It fascinates me that God may have raised-up the Robertson’s from the ranks of a congregation rather than relying mostly on the heavy hitters in pulpits around the country. But God is known for doing the unexpected now and then. The Robertson’s demonstrate a powerful reality for each person in the congregation: every believer does not need a doctorate in theology, a job as a pastor, and flawless skills in oration to communicate the faith.

The question remains: is Phil Robertson still happy, happy, happy? Other than Phil, Miss Kay may be the only person who knows for sure. I don’t know Phil but I’ve know men similar to Phil, and not much bothers them. I believe Phil Robertson is most likely still happy, happy, happy, because he’s had a life-changing encounter with God. Prior to God entering his life, Phil had seen first-hand how bad life can get. This brouhaha over Phil’s comments regarding sin probably doesn’t come close to the dark places he’s been in the past.

If nothing else, Uncle Si Robertson’s character proves that God has a tremendous sense of humor.

Recently, Phil Roberson, of the popular Duck Dynasty TV show, gave an interview with GQ magazine (which made me wonder if GQ plans to feature camo attire for hipster men). The GQ interviewer asked Phil a question about homosexuality. Phil’s answer included his opinion on same-sex sex (from a heterosexual male perspective) as well as a reference to same-sex sex that is included in a list of several sins within the Bible. Since the interview, Phil has been demonized by the gay community and progressives as Satan incarnate.

Some of Phil’s comments were likely an attempt at humor. He is, after all, a purveyor of humor on Duck Dynasty. But Phil does not veil his Christian faith or his personal preferences. He draws his faith beliefs from the Bible. If you don’t believe the Bible is God’s word to humanity or if you don’t believe in a moral and loving God who sets safe boundaries for human behavior, what difference does it make to you what Phil Robertson believes? Nevertheless, enlightened progressives & representatives from the gay community called Phil a homophobic bigot and hater. They claim such bigotry is born of ignorance. That’s a two-way street. In other words, one could say the same of some in the gay community and their beliefs about Christianity.

Here’s the truth: real Christians (I’m assuming Phil is a real Christian) feel sad and empathetic when they see people hurt themselves by engaging in sins. That includes ALL sins, not just those that aren’t fashionable at the moment. For instance, greed is not currently in vogue so a great number of folks consider it socially acceptable to demonize the greedy. If Phil is indeed a genuine Christian, then his comments about sins, as described in the Bible, are not an attempt to hurt people or make them feel bad about themselves. It’s just the opposite. It is a straightforward (no pun intended) effort to encourage people to stop self-destructive behavior and draw closer to God. After all, anybody who knows Phil’s personal story knows that he has experienced first-hand the devastating effects of sin and poor choices.

I’m fairly confident Phil knows that people can’t be forced to stop making bad choices. People will ultimately do what they want, not necessarily what is best for them. Some people will even claim to be enlightened when they are actually living in darkness. But Phil’s conscience dictates that he speak truth as he understands it. Every American should take note of this and rediscover the sacred value of free speech and how necessary it is for the survival of the human spirit. Without free speech we will unavoidably become slaves to someone else’s tyranny. And free speech is not a commodity for a select few. If everybody doesn’t have free speech, nobody has it.

Anhedonia is not a country in Eastern Europe. It is the inability to experience pleasure. Granted, most of us do not suffer from this malady, but not through lack of trying. We Christians, generally speaking, often struggle to enjoy ourselves. For me it started in adolescence when I heard the Parable of the Rich Fool, found in Luke 12:15-21. In the Parable, a man harvests a massive crop that sets him up for the good life for years to come. He tells his soul it is time to sit back, eat, drink, and be merry. There’s just one problem: he died that night and never got to enjoy the fruit of his work. He probably didn’t make it to heaven, either.

The moral lesson of the Parable deals with people who have little or no place for God in their life. Without God as our most significant other, all our plans, achievements, and pleasures are meaningless. The problem is that many of us heard this Parable and took it too far. We have become hyper suspicious of pleasure. Just to be clear, I’m not referring to sinful pleasures (e.g. drunkenness, fornication, gluttony, laziness, sexting, Miley Cyrus concerts, etc.).

In my opinion, there is nothing innately sinful about common pleasures such as enjoying a fine meal, music, or a back rub from your spouse. It’s just when we allow pleasure to replace God as our most significant other that we cross the line into unwise territory.