Last Sunday I enjoyed a great homily. (Not to be confused with hominy, those bleached kernels of corn your parents forced you to eat when you were a child.) Anyhow, the pastor’s message was about loving mercy more than justice. The Bible reference used for the message was the story of Joseph, who was betrayed by his brothers because they resented the fact that Joseph was their father’s favorite son. Out of jealousy, they sold Joseph into slavery. The beginning of Joseph’s story can be found in Genesis 37. It’s a long story so we will jump ahead to one of the key elements that can help us navigate our broken relationships today. It’s found in Genesis 42:21-22. But first let me set the stage. Through a series of spectacular events spanning many years after being sold into slavery, Joseph has risen to a position of power in Egypt. His brothers, facing a famine in the region, have come to Egypt to buy food for their families to survive. Joseph is now in a position to repay his brothers for their horrible mistreatment of him. His brothers do not recognize Joseph when they meet him in Egypt. Joseph tests his brothers by accusing them of being spies. He wants to see if their hearts have changed for what they did to him many years before. His brothers fear for their lives. Here is how his brothers respond while discussing their situation amongst themselves:

“Then they said to one another, ‘In truth we are guilty concerning our brother, in that we saw the distress of his soul, when he begged us and we did not listen. That is why this distress has come upon us.’ And Reuben answered them, ‘Did I not tell you not to sin against the boy? But you did not listen. So now there comes a reckoning for his blood.’”

Joseph eventually reveals himself to his brothers and forgives them. He tells them not to be distressed or angry with themselves for what they did to him because God used their actions to save lives. Joseph goes even further by providing financially for his brothers and their families. Joseph and his brothers reconciled because their hearts were all in the right place. His brothers faced up to the evil they had committed. They were contrite. Joseph’s actions demonstrated his love of mercy over justice.

Here’s the fly in the ointment: We often have broken relationships with family members or former friends who are unaware of, or adamantly resist, their responsibility to own their role in the mess. Human nature tends to ignore or rationalize its actions or inactions rather than own its role in wrecked relationships. In the ecosystem of the church, we often hear the imperative to forgive even when the other person does not ask for forgiveness. We forgive for our own healing and because it pleases God. I agree with this principle. However, we must somehow deal with the tragic reality that some people who have wronged us may never feel remorse and seek reconciliation. Others may wait to the last minute. My mother, literally on her death bed, expressed regret for some hurtful treatment of my wife and daughter.

So what do we do when someone who’s wronged us hardens their heart and refuses to face up to the relational wreckage they’ve wrought? Or how do we respond when our attempts at reconciliation get the cold shoulder? Do we suck it up and get on with life? There is a simple verse that packs a lot of punch on this subject. It’s found in Romans 12:18:

“If possible, so far as it depends on you, live peaceably with all.”

Did you catch that? It says “so far as it depends on you.” This means there are limits to what we can do. This flies in the face of our American psyche that says we can do anything we set our mind to. Sure, we can land a functioning high-tech Rover on Mars, but we can’t fix all of our broken relationships. There is something reassuring about the inclusion of this verse in the Bible. It validates my responsibility to do what I can towards the goal of restored relationships, but also sets a boundary that guards my mental, spiritual and physical health. When we bump into that boundary, the broken relationship is in the hands of the other person and God. If I cross that boundary and try to do more, to make the other person see the light, I encroach on God’s domain.

So, as your extended family gathers for Christmas celebrations, and you face that insufferable uncle Fredo whom you loathe for failing to repay you for the money you loaned him to start that alpaca farm, remember the boundary and don’t cross it. (Or have a couple of glasses of wine to loosen your tongue and let the show begin . . . the choice is yours.)

Getting Gas, Getting Angry

A couple days ago, I went to fill up a car with gas. All the pumps were in use when I pulled into the gas station. Fortunately, one customer in front of me had just finished and was pulling out. I pulled into his place and got out to pump my gas. There were two additional customers in front of me that finished filling up while I was pumping my gas. The two customers in front of me drove away. Their exit left no cars in front of me. A couple minutes later a truck pulled in behind me. The driver of the truck honked his horn, then gunned his engine while racing around me to use the front pump. A second truck rushed around me and slipped in to use the pump directly in front of me. Driver number two got out and addressed driver number one: “That guy is a jackass,” he said, nodding in my direction.

Oddly, I didn’t feel compelled to defend my honor by stating that I would have gladly pulled all the way forward when I arrived, but the spaces were all taken. These days, my wife would tell you I obsess over being courteous to other drivers. But twenty-five years ago such a reckless indictment of my character might have ended in a colorful exchange of invectives. (I had a short fuse back then . . . you got a problem with that!)

Seriously though, when both of those disgruntled drivers arrived at the gas station, they assumed that I had selfishly taken the nearest pump rather than pull forward, thus causing them a slight delay and inconvenience. And even though they had plenty of room to go around me, they became furious that I was in their way.

We live in a culture where a dangerous attitude has taken root. It’s the VIP attitude that says to the world: I’m special, I’m busy doing important things, and anybody who dares to get in my way can go to h#!!.

Here is an excellent way to come against this foul attitude. It’s found in Proverbs 15:1:

Had I pointed out the faulty judgment of those two drivers in the gas station, especially if I’d included an expletive or two, it could have got ugly, even violent. I chose to ignore them. My non-response eventually deflated their anger. Sadly, I don’t always use the “gentle answer” approach when it’s most needed. Self-centered attitudes don’t go away without a fight.

I’m not suggesting our answers need always seem gentle. Sometimes speaking the truth or setting boundaries with toxic people can seem ungentle. There are times when it’s appropriate to protect ourselves and others. I don’t think God has a problem with us for occasionally speaking up for ourselves and others, but I suspect many of us are so full of ourselves that the “gentle answer” approach is rarely on our radar. I’d like to say that all we need do is pray for the grace needed to give a gentle answer in the face of wrath, and it will come. The reality is we often don’t feel grace flowing when we so desperately need it. As usual, it’s a matter of having a pliable heart that God can work with. 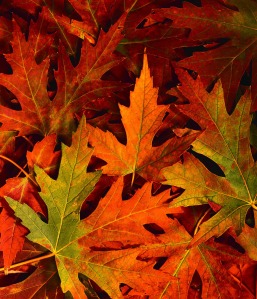 A couple days ago, while taking my morning constitution (an archaic term used to describe a walk taken for health reasons), I passed a house with a front lawn covered in leaves of Liquidambar. You might not think that’s a strange sight on a fall morning, except there was no Liquidambar tree in that front yard. In fact there was no tree of any kind in that front yard. I stopped and scratched my head, trying to deduce a solution. I looked at the yards on both sides and across the street, thinking that the leaves might have blown from a tree nearby. Nothing! I could almost picture God snickering at me. (Had I just been pranked by God?)

If you spend some time in the Bible you will eventually encounter unanswered questions, such as: Why would a loving God deny Moses access to the Promised Land? Why did God seem to use Job as a pawn in a celestial game of chess? Who let the Serpent into the Garden of Eden? Why do Jehovah’s Witnesses dress so nice? (Did I say that out loud?) Why does God heal some folks but not others?

The thing about the mysterious ways of God is that we can let them rankle and drive us away from God, or we can yield to God. Don’t get me wrong, God designed our species to be inquisitive, to explore, to discover, to solve problems. But our intellect has limits. That’s why God also blessed us with a heart that has the ability to embrace and love God even when we don’t have all the answers. Besides, a little mystery makes life more enthralling, don’t you agree?

Out of the Boat

Nevertheless, within the ecosystem of Christianity there are some folks who experience the hand of the Lord on their lives more than others. They are the folks often called to work in challenging and fulfilling ministries. When they answer the call from God, they step out of the boat and walk on water (metaphorically, of course). I’ve stepped out of the boat a few times in the direction I thought the Lord had called me to take, only to . . . well, not walk on water. It’s not that I took my eyes off the Lord; I honestly don’t know what happened. But after a few incidents of flailing about in the turbulent waters, you grow wary of stepping out of the boat.

When I examine my life now, it’s not so bad inside the boat. Psalms 46:10 says: “Be still and know that I am God.” In a way, it feels good to let go of the craving for a grand purpose from God. The dream of running with the big dogs in ministry fades. Simply knowing God could be enough.

Perhaps the Lord would have some of us learn that placing too much importance on purpose, even purpose in ministry, is hazardous. Purpose can easily seduce us into a sense of self-exaltation and worth through action. But what is my worth? How is it measured or defined?

Ecclesiastes 3 says there is a season for everything: “A time to search and a time to quit searching.” The season to quit searching for purpose comes with a sense of sadness and serenity. It’s just the way it is.

Yep, it’s not bad in the boat. After all, that’s where Jesus was headed in the first place.